Back to FAQ Center

Applies To: All SMP series

This document is only for your reference. Although we strive to provide in this document the latest developments, we do not warrant the accuracy, effectiveness and suitability of any information contained in this document. The document may include technical inaccuracies or typographical errors. CAYIN TECHNOLOGY reserves the right to make additions, deletions or modifications to the information at any time without any prior notification.

This document is copyrighted by CAYIN TECHNOLOGY. You may not modify, alter, or copy the content of this document.

NOTE : All the descriptions of digital video in this document are simplified for a better and clearer understanding. Please refer to the MPEG Website (https://mpeg.chiariglione.org) for detailed information.

Video, also called motion picture, comprises a series of still images displayed in rapid succession at a constant rate. As digital video is getting popular nowadays, it has become a new and crucial technology to compress and store digital video files into digital media.

Digital video has the following attributes:

Normally, digital videois stored into a memory card or storage device (such as an HDD or SD Card) in the format of digital files.The compressed digital video data will be converted into some popular file formats, such as MP4, AVI, MOV, FLV or WMV. These file formats are also called encapsulated formats or container formats. Some container formats are named the same as the codec (e.g. WMV, MPEG), so users might get confused when talking about these terms.

AVI is a kind of container format that will convert video/audio codec, respectively.

A container format can help the program in a media player to locate the right codec of video/audio and provide necessary or metadata information (such as width, height and the length of video files, frame rate) in the file header for decompressing files. It also can help a media player program synchronize a timestamp for both video and audio so that video and audio can play synchronously.

Some complicated container formats can process many tasks and provide lots of codec information to media players. On the contrary, some containers, used in special applications, are so simple that they provide only basic information for audio-video synchronization. For example, MPEG-TS, the container format for digital broadcasting, is quite simple, because this task requires playing streaming video from any segment of it. This simple container format can reduce the complexity of the file header, which enables media players to start or resume playing video (or streaming) files from any segment without starting from the very beginning of each file.

Compression is a very complicated but key process for reducing the size of video data. From early VCD (MPEG-1) to DVD (MPEG-2) to widely used AVC (H.264 or MPEG-4 Part 10) and HEVC (H.265), video compression technology is constantly developed to lower bit rate but at the same time increase the overall quality.

Some Useful Software and Tools

The following are some video tools for your reference.

NOTE : CAYIN DOES NOT produce orsell the following tools, except CAYIN MediaSign Player. We DO NOT in any way take any kind of responsibility for using them.

QThe video will stop or does not play smoothly.

Usually, this is because the video file exceeds the maximum limit of this SMP player. If the video bit rate is too high, the performance of other components (such as ticker, Flash and images) that are simultaneously playing on the same skin may also be affected. We suggest you check the video contents or other relative components. Try to find out which content reduces the overall play performance.

If you play more than one video file at the same time, for a better result, allocate the high bit rate and high-resolution video files in the first video zone or as the “video/main”. Thus, the video will use hardware decoding and provide better performance. (Please refer to CAYIN online help for more details: Using CAYIN Media Player in HTML).

In CAYIN SMP-NEO2 software, the system will help you verify video files and see if they are playable. Once you complete the media file selection in Skin Editor, all selected files and folders will be listed in the table. There is a verification icon in front of each file name to show the validity of the video file. By clicking the icon, you can see the detailed information about the error items. 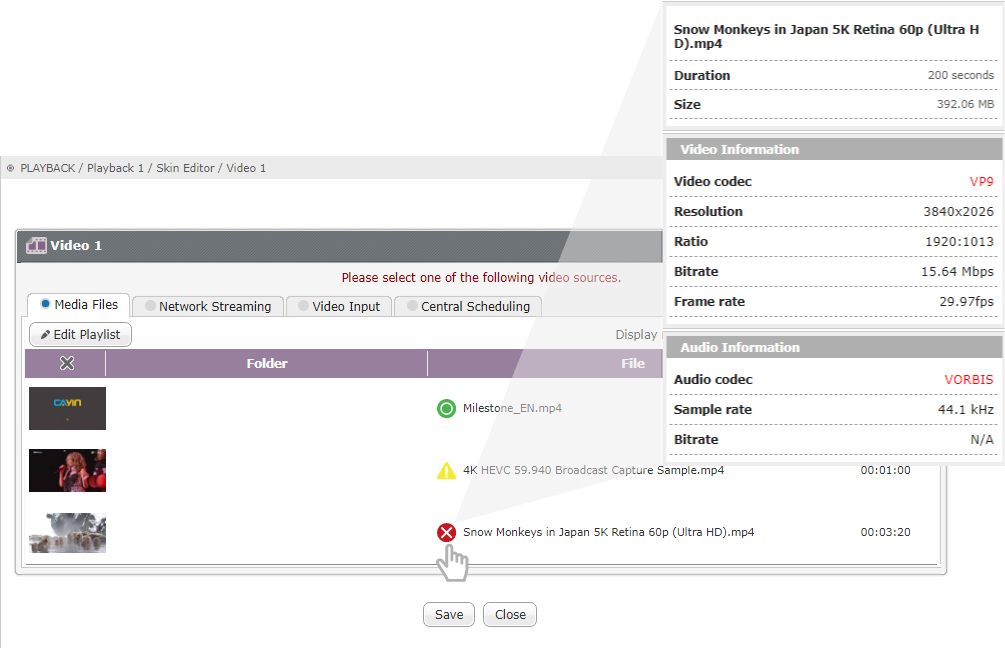 The meaning of each icon is shown below:

The codec and bitrate of this video file are supported.

This is a warning icon. For example, the bitrate might be too high.

The codec of this video file is not supported. Please replace the file.

NOTE : The maximum bit rate and resolution might be different based on your file encoding methods. We acknowledge video playback results may be influenced by many factors, such as codec, bit rate, screen resolution or other components playing with video at the same time. Please test the video on SMP players in advance. CAYIN DOES NOT GUARANTEE EVERY VIDEO FILE CAN BE PLAYED ON SMP PLAYERS PROPERLY WITHOUT TESTING BEFOREHAND.